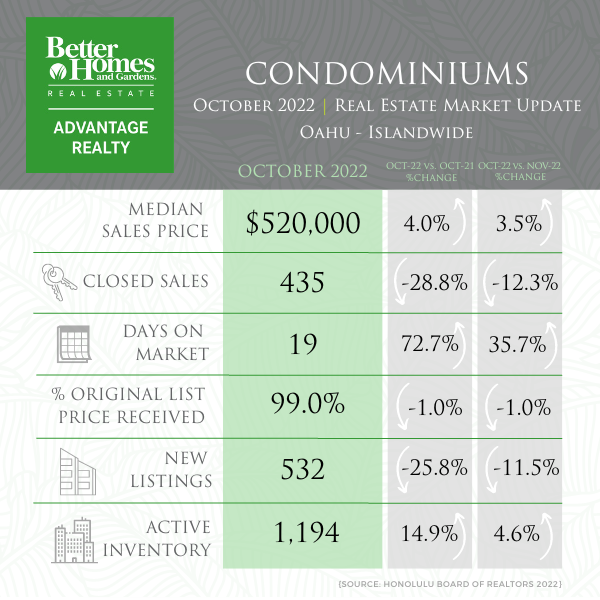 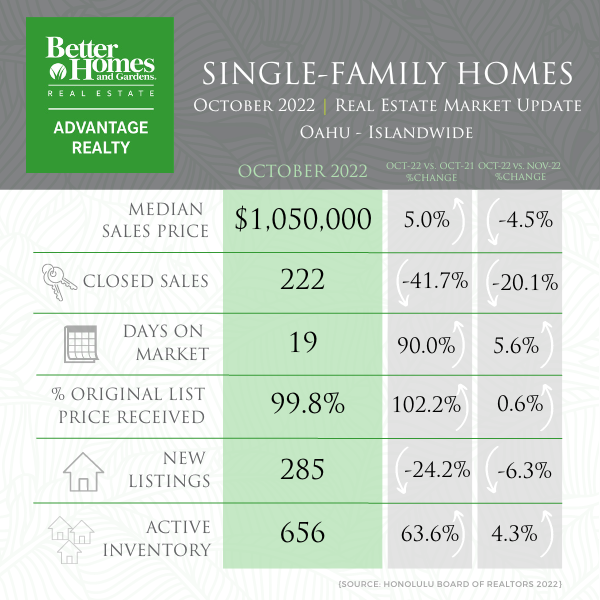 Oahu Home Sales Drift Downward Amid Dampened Buyer ActivityProperties are spending longer on the market, marking a median of 19 days

Buyer activity continues to slow with closed sales of single-family homes dropping 41.7% and condos falling 28.8%. Median sales price growth has also decelerated, though prices remained up year-over-year, with single-family homes increasing 5.0% to $1,050,000 and condos rising 4.0% to $520,000.Properties that closed in October were on the market for a median of 19 days in both markets, up approximately eight to nine days year-over-year. Bidding over the asking price is shifting downward in both markets. For single-family homes, sales this October were split, with 50% of single-family home sellers receiving their full asking price or more, while the other 50% of sales closed below the original asking price. That’s a notable difference considering 75% of single-family homes sold at full asking price or more in October 2021. The condo market also saw 48% of sales close at the full asking price or more, compared to 59% last year.Single-family homes in the $800,000 to $999,999 range made up the largest portion of sales, accounting for 31.5%, though the number of sales in that range decreased 42.6% compared toOctober 2021. Higher-priced properties at $2 million and above saw a sharp 63.3% drop in sales. The Diamond Head and Ewa Plain regions experienced the most significant reduction in sales volume, falling 62% and 53%, respectively.Like September, the decline in condo sales occurred primarily in the $799,999 and below range, dropping 34.4% year-over-year, while sales in the $800,000 and above range saw a modest increase of 4.6%. The Ewa Plain and Metro regions recorded the most significant sales drops, declining 50% and 24%, respectively.In October, fewer new listings were added to the market, dropping 24.2% for single-family homes and 25.8% for condos year-over-year. Compared to last year, both markets saw a smaller portion of new listings in escrow or sold by the end of the month. Approximately 30% of the new listings were in escrow or sold by the end of October. Last year, that portion was 56% for single-family homes and 48% for condos.Most single-family home price points saw an increase in active inventory, though properties in the $800,000 to $999,999 price range more than doubled, skyrocketing 153.2% compared to a year ago. All regions saw an increase in active inventory of single-family homes. Several regions, including Ewa Plain, Leeward, Makakilo, and Pearl City, saw more than double the inventory from last year. Similarly, active inventory for condos increased across most of the island, though inventory was down in Diamond Head and Pearl City, dropping 43% and 26%, respectively. Condo active inventory declined 22.6% in the $100,000 to $399,999 range, while the $500,000 to $699,999 price range saw the largest increase, up 73.4% from a year ago.Pending sales for both markets declined in October, with contract signings down 50.5% for single-family homes and 45.7% for condos.

{source:  Honolulu Board of REALTORS®}

Thank you for your inquiry.